1. What do you understand by computer networking?

A computer networking comprises  two or more computers connected through some communication media and network components in order to  share network resources among each other.

The communication media can be wired or wireless. The commonly used wired media are twisted pair cable, coaxial cable and optical fibre.

The wireless media can be radio frequency, infrared or Bluetooth.

2. What are the different types of networks?

Computer networks can be classified into different types.

3. What is network topology?

The network topology defines the structural arrangement of these network components how they are interconnected with each other. In other words, the network topology may be defined as the schematic layout of transmission cables connecting various network devices and nodes in a network.

4. What are the different types of network topology?

5. What are the different layers of the OSI model?

The OSI Model is divided into 7 distinct layers as follows:

6. What is the function of the application layer?

7. What is the function of the presentation layer?

It is the sixth layer of the OSI model and deals with the syntax and semantics of the information exchanged between the two entities. The major functions of Presentation layer are : translation, encryption/decryption and compression/decompression.

8. What is the function of the session layer?

It is the fifth layer of the OSI model. The role of the session layer is to establish, maintain, monitor, and synchronize the dialogue control between the two sessions.

The major functions of the session layer are  :

9. What are the different functions of the transport layer?

It is the fourth layer of the OSI model and deals with the process communication between the two systems.

The transport layer receives the data from the upper layer, breaks down them into smaller uniform units called segments, and passes them into the network layer.

The major functions of the Transport layer are :

The connection-oriented transport layer, at first, establishes the connection between the source and destination. Each segment transmitted to the destination is ensured that the segment is received correctly or not. The sender retransmits the same segment again and again until the acknowledgement is received by the sender. It uses the connection-oriented protocol TCP ( Transmission Control Protocol). This protocol is considered to be a reliable protocol. But, it is a slower connection, hence cannot be used in real-time communication.

The connectionless transport layer does not wait for the acknowledgement of the packet received by the destination node. It just assumes that the packet has been reached the destination just fine and keep on sending the consecutive packet without waiting for an acknowledgement. There is no need of establishing a connection between the source and destination. Hence, it is called connectionless. It is also called unreliable because there is no guarantee of the delivery of data packets. However, it provides faster communication between devices other than connection-oriented transmission. Hence, connectionless transmission is used in real-time communication like Live video streaming, video conferencing, etc. UDP (User Datagram Protocol) is the most important connectionless protocol used in the transport layer.

10. What are the main functionalities Network layer?

The router is a vital network layer device that acts as a network controller and routes the packet to its desired destination.

11. Explain the functions of the data link layer?

It is layer 2 of the OSI model and is responsible for reliable node-to-node delivery of data packets. The data link layer adds a physical (mac)address to the packet received from the network layer to create frames. Other than adding a mac address in the frame header, the data link layer also adds a frame check sequence to its trailer for error-free delivery of data frames from source to destination.

LLC sublayer provides the interface between the multiple network layer protocols like internet protocol and the media access methods using multiplexing techniques. It is responsible for error control and the end to end the flow of frames.

MAC sublayer is responsible for adding the physical address to the data packets from the upper layer to constitute frames. It also provides an interface between the LLC sublayer and the physical layer of the OSI model. It acts as a multiple channel access mechanism for different transmission technologies.

12. What is the function of the data link layer?

It is the lowermost layer or layer 1 of the OSI model and is responsible for the physical connectivity of two different nodes for data communication. It converts digital data into streams of raw bits and transmits them through communication media in the form of electrical or optical signals. different types of encoding techniques are used to transmit these strings of 0’s and 1’s through the transmission channel.

13. How many layers are there in the TCP/ IP model?

The TCP/IP model is divided into four distinct layers to understand the functionalities of different protocols implemented in each layer.

14. Enumerate the major difference between the OSI model and the TCP/IP model?

15. What is the network protocol?

Different protocols have their own set of rules and regulations to perform specific processes during the exchange of information between the devices. Such protocols are operated in different layers of network models. Some of the most commonly used protocols are listed below:

16. What are the different types of network devices?

The most popularly used network devices are: 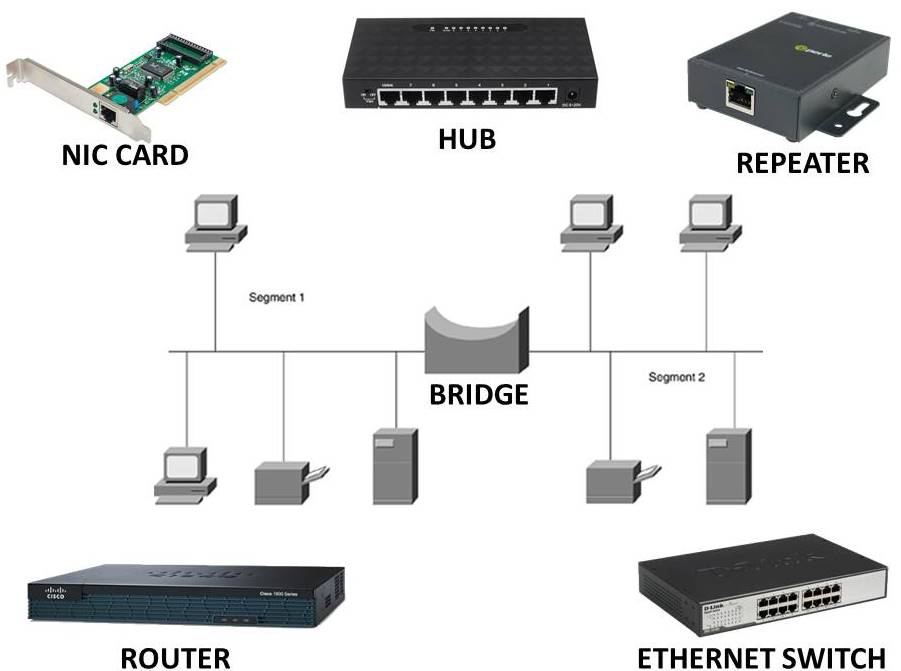 17. Differentiate between hub and switch.

Switch is a layer 2 device. it operates at data link layer of OSI model. Basically it is used at LAN environment. Switch is more intelligent than hub because when a switch receives data frames, it inspects the destination Mac address of the frame. It then checks whether the destination Mac address is mapped with which switch port and then forward frame to that specific port. Switch has a single collision domain and multiple braodcast domain.

On the other hand, hub is a layer 1 device and operates at physical layer of OSI model. Hub cannot analyse the frame it receives . It simply regenerates the incoming signal and braodcast to all other ports. Hub has a single collision domain and a single broadcast domain.

18. Differentiate between switch and router?

Switch works at data link layer of OSI model and uses Mac address to forward frames from one port to another.  It maintains Mac address for mapping Mac address with the switch port.

19.  What is the difference between intranet and the internet?

20. What is IP v4 addresses and their different classes?

An Internet Protocol (IP) is a network layer protocol of the OSI model. Its main function is to provide logical addressing for every data packet received from the upper layer. This protocol further adds source IP address and destination IP address to the packet and sent over the network to reach its destination.