This section will provide you the most commonly asked CCNA interview questions and answers.

1. What are the different layers of the TCP/IP model?

The application layer is the topmost layer. It provides network access to the users and applications. The different protocols and services used in this layer are HTTP, Telnet, FTP, DNS, DHCP, SMTP etc.

The transport layer is responsible for the process to process communication between the two hosts. It provides the functionalities such as Segmentation and reassembly, Service point addressing, Connection control. TCP and UDP are the two major protocols of the transport layer.

The network interface layer is responsible for encapsulating IP packets received from the internet layer to data frames. The data framing is done by adding a physical address of the host. The frame is further transmitted over the physical link on the same network.

2. Compare the TCP and UDP protocols.

TCP stands for transmission control protocol. It is a connection-oriented protocol. It establishes the TCP connection between the two hosts before exchanging the data between them. It waits for the acknowledge message for every segment sent to the destination. Hence, it is also called the reliable protocol.

UDP stands for user datagram protocol. it is called unreliable because it does not guarantee the delivery of the segment to the destination. It is also called a connectionless protocol. UDP is faster than TCP. Hence is used in real-time communication such as live streaming.

3. What do you understand by IP routing and mention different types of routing?

IP routing is the process of finding the best possible path to send IP packets from source to destination in an IP network. IP routing occurs at layer 3 of the OSI model. Hence, the router is a device that processes IP routing.

The different types of IP routing are:

4. What is the function of a router in networking?

The router is a network device that operates at layer 3 of the OSI model. The main function of a router is :

5. Differentiate between layer 2 and layer 3 switches

6. What is NGFW and its advantage over the traditional firewall?

NGFW stands for Next-gen firewall. NGFW is a network security device that has functionalities and capabilities beyond a traditional firewall. It functions exactly similar to the stateful inspection firewall. Howver it has many other additional features such as integrated IPS (intrusion prevention system, application awareness and control, deep packet inspection (DPI), advanced malware protection (AMP) and so on.

The major advantages of NGfw over a traditional firewall are:

9. What are the different types of routing protocols?

The routing protocol is responsible for sharing routing information among the neighbour routers and finds the best possible and reliable path to forward the packet from source to destination network. 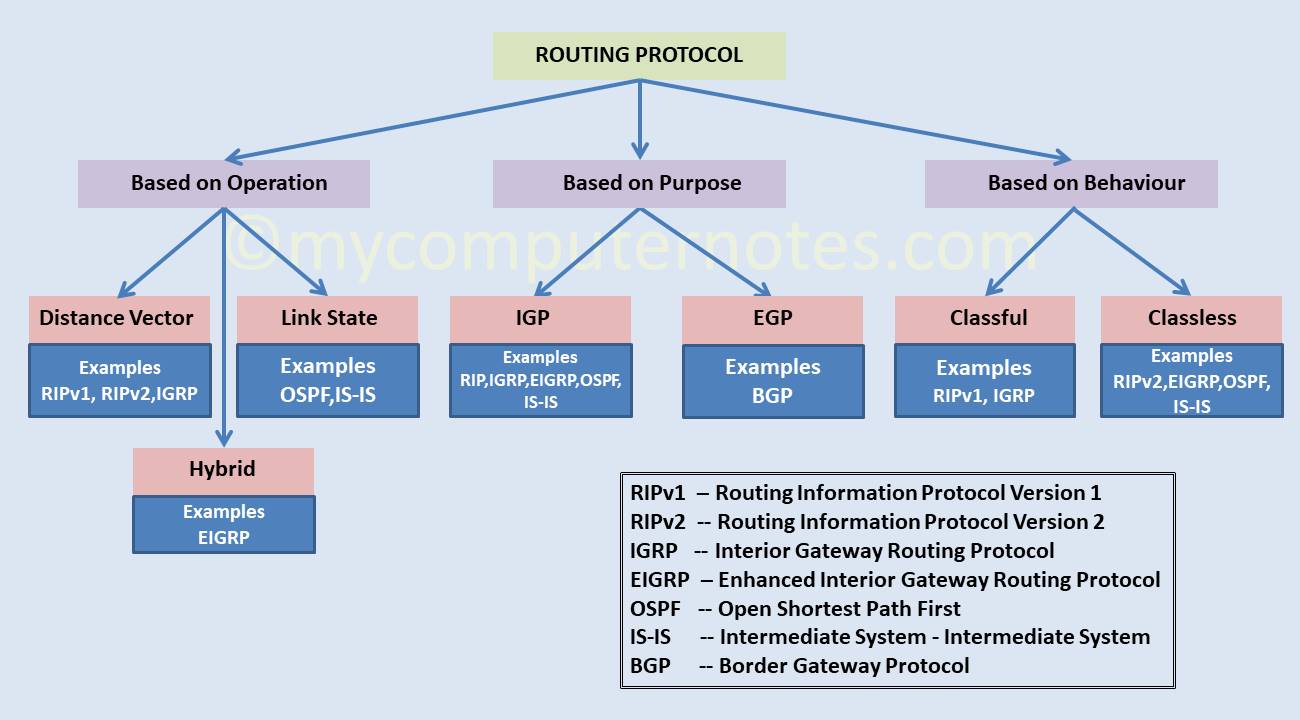 NAT stands for Network Address Translation. It is a process by which the private IP address of the internal network is converted or translated into a public IP address. The implementation of NAT  on a network overcame the shortage of IP version 4 ( IPv4) addressing schemes. Because the accelerated growth of the Internet had lead to the rapid depletion of IP v4 addresses.

Static NAT provides one to one mapping of a local address to a global address.

NAT overloading is the most prominent NAT. It is a type of dynamic NAT, however, it can map multiple private IP into single public IP. This makes use of Port numbers. Hence, it is also called PAT ( Port address translation).

11. What do you understand by DHCP?

DHCP stands for dynamic host configuration protocol. DHCP is a network management protocol that helps to assign an IP address to the host dynamically. In addition to the IP address, it also assigns a subnet mask, default gateway and DNS server. DHCP server automates and manages the allotment of IP address to the client or host centrally.

12. What is the difference between static routing and dynamic routing?

Difference between Static and Dynamic Routing

13. What is VTP and its various modes?

Each switch can use one of four different VTP modes:

14. What do you understand by administrative distance?

Administrative Distance or AD is the numerical value ranging from 0 to 255 that rates the trustworthiness of the routing information received from the adjacent router.  The route with the least value of AD will be considered as the best path for routing and the same value of AD is updated in the routing table.

The different routing protocols have their won pre-defined AD value

The AD value of EIGRP is as follows

16. What is the AD value of static routing?

17. What is the function of SNMP in network operation?

SNMP stands for Simple Network Management Protocol. It is used to manage different devices such as endpoints, servers routers and switches across the network.

18. What is the function of DNS with the network?

DNS stands for Domain Name System. DNS is an application layer protocol to resolve IP addresses to the domain names and vice versa. DNS is also called the phonebook of the internet. It is a directory service that provides the mapping of hostnames with their numerical address.

19. What is the difference between  peer to peer and client-server network

In peer to peer network, there is no centralised server. All the nodes act as clients as well as servers. It is useful for the smaller network.

Whereas in a client-server architecture, there is a centralised mechanism called server. the server takes control over the entire network. The clients are connected to the server within the security domain. They cannot access the network resources without the prior permission of the server. This network architecture is useful for a large networks.

20. What is the range of private IP v4 address