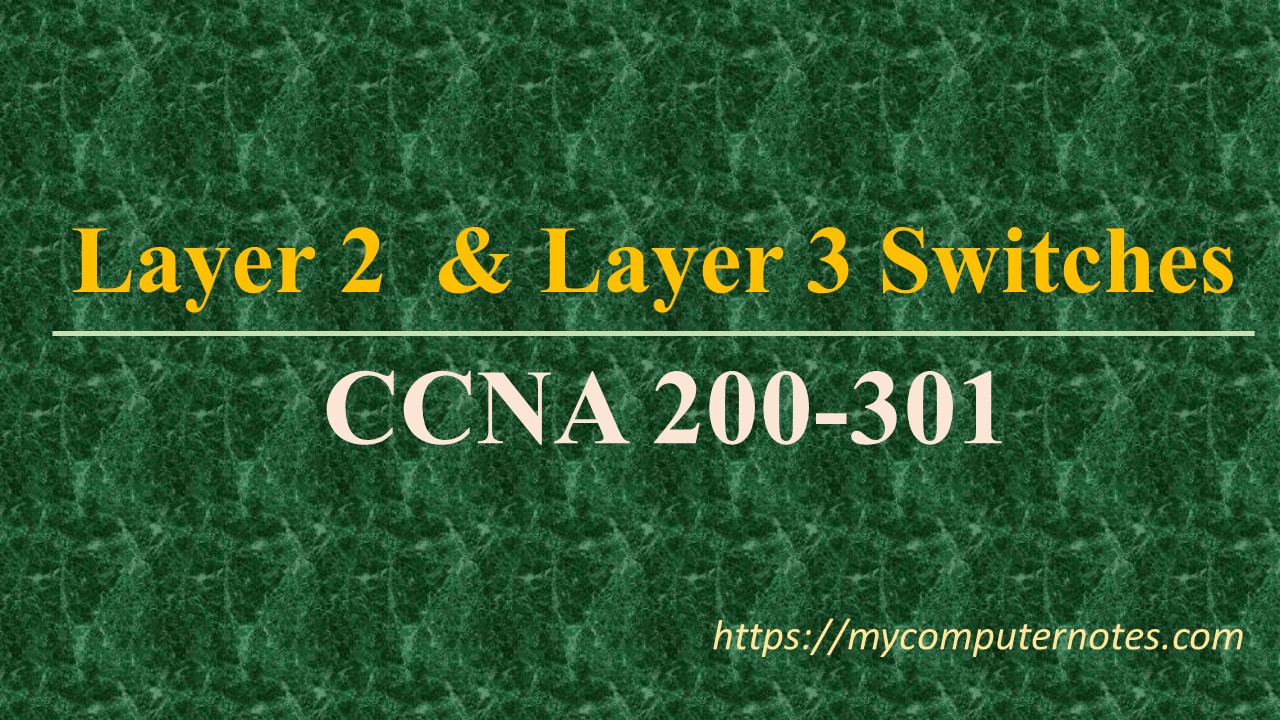 What is a switch in networking?

The network switch is also popularly known as an ethernet switch or a LAN switch. It is the network component that forwards data frames from source to destination on the basis of the device’s mac address.

Basically ethernet switch operates at layer 2 of the OSI model. That is why it is also called a layer 2 device. However, the switch can be layer 2 or layer 3 depending on their roles and functionalities. The layer 3 switches can operate at layer 2 as well as layer 3 of the OSI model. I will discuss in details layer 2 and layer 3 switches in the later section of the article.

Characteristics of switch in networking

The major characteristics of the switch are enumerated as.

The switch can be two types: unmanaged and the managed switch.
The managed switch is further categorised into layer 2 and layer 3 according to their roles and functionalities. 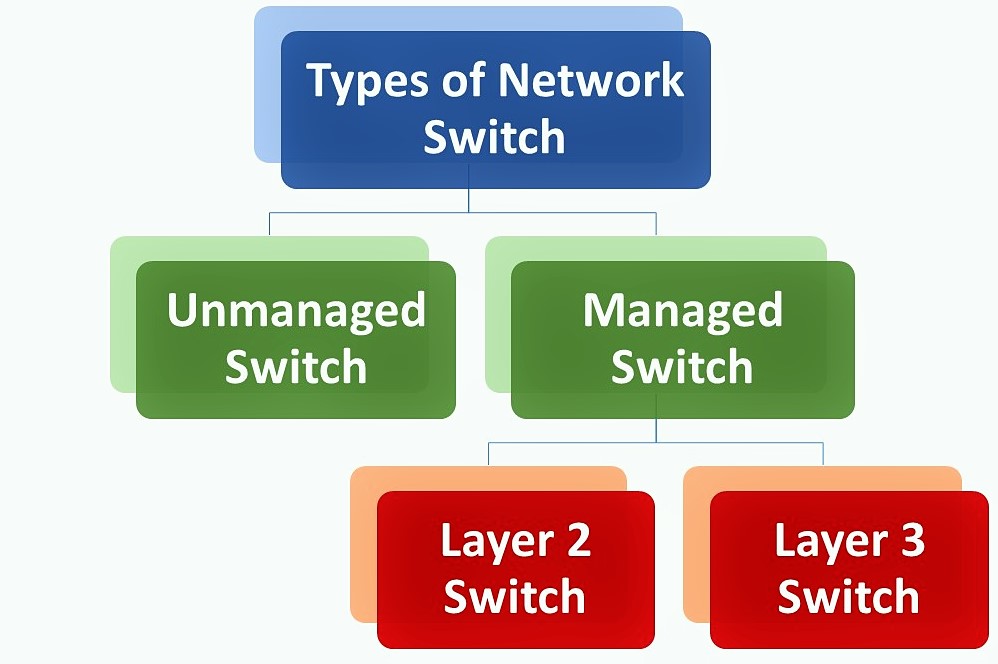 Comparison between Layer 2 and Layer 3 Switches in Networking

By default, the switch contains a single broadcast domain and multiple collision domains. Initially, the switch broadcast the frame to fetch the destination mac address of the device and makes an entry in the mac table. The switch then makes a forwarding decision by examining the mac table.

Remember, the data link layer of the OSI model provides hop to hop delivery of the frame. The destination mac address changes at every hop. 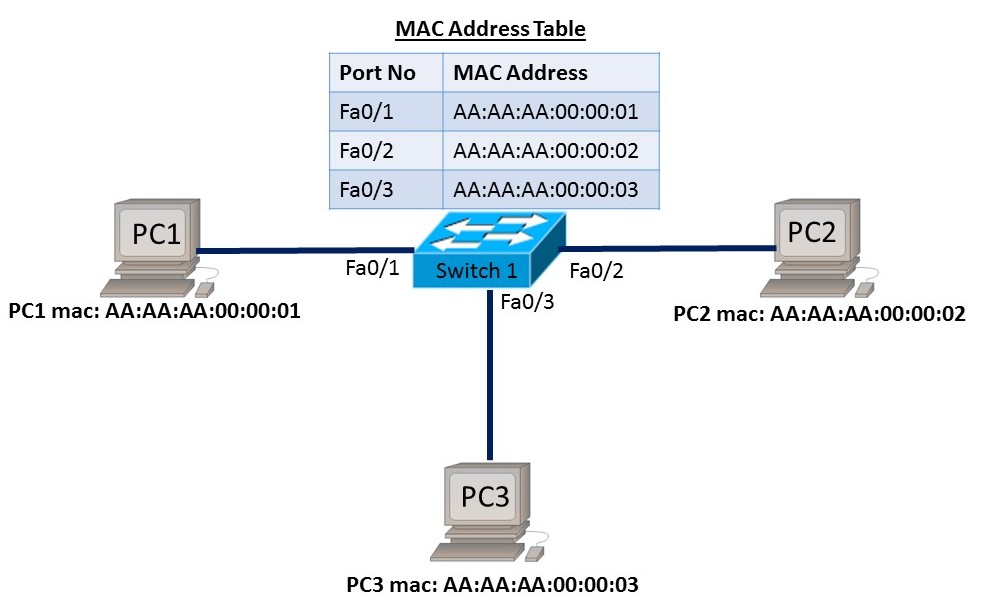 Look at the diagram above to understand how switches the forward frame on one device to the other.

Suppose PC 1 wants to send data to PC2. The following sequence of events happen to traverse data from PC1 to PC2

When information is sent from source to destination, the actual information or data has to pass through the different layers of the OSI reference model. the actual data is encapsulated by the corresponding layers with their header information. The data with the header field in each layer is called PDU (Protocol Datagram Unit). The PDU at each layer is represented by a unique name as follows:

In this article, we are talking about the ethernet switch. hence we will concentrate on the data link layer of the OSI Model.

In the data link layer, the upper layer PDU or packet is encapsulated with header and trailer information and is termed as the ethernet frame. The Ethernet frame comprises different fields. The frame format and its different fields are described in IEEE 802.3  standards.

The header field consists of 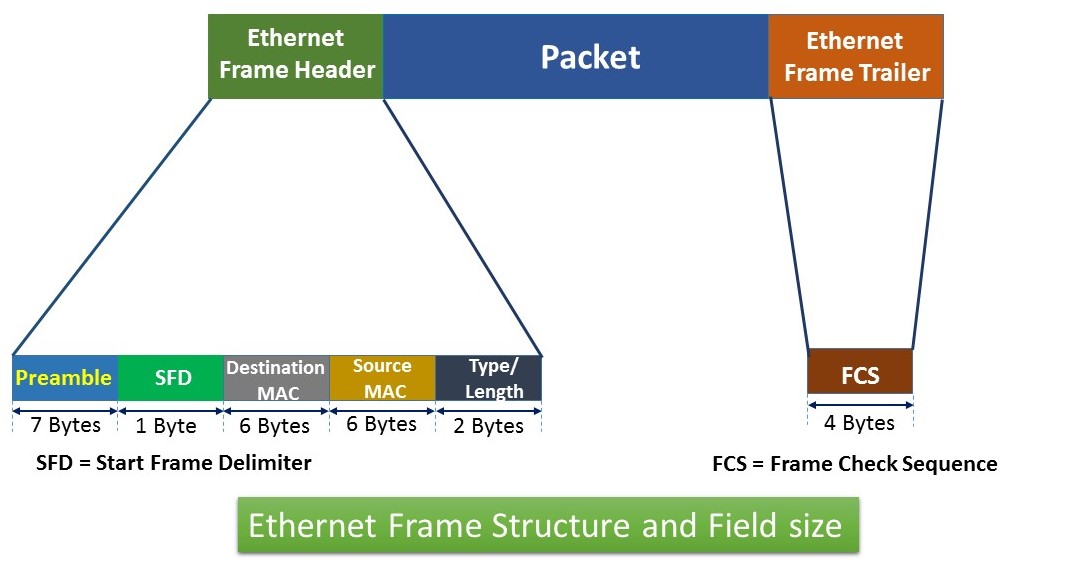 The preamble field is the beginning of the ethernet frame. It is  7 bytes or 56 bits in length. It is series of alternating ones (1s) and zeroes (0s). The main function of the preamble is bit synchronization. It allows the device to synchronise the receiver clock and ensure that the receiver is ready to receive the data.

SFD is the second field of the ethernet frame. It is 1 byte or 8 bits in length. The SFD bit pattern is 10101011. It looks similar to the preamble. The only difference is the last bit is always 1 in the SFD field.

The destination address field contains mac address of the receiving device. The length of mac address is 6 bytes or 48 bites.

The mac address of the device is explained in details later in this article.

The source address field contains the mac address of the transmitting device.

The Type/Length field is 2 bytes or 16 bits in length. It is used to indicate the upper layer protocols encapsulated with the payload.  It also indicates the length of the ethernet frame.

There are two conditions to represent this frame field: Type and Length

If the size of the ethernet frame is less than or equal to 1500 (bytes), then it represents the length of the frame.

If it is greater than or equal to 1536, it represents the type of protocols used in the encapsulated packet. The protocols may be IP v4 or IP v6.

If the value is 0x800 (hexadecimal), it indicates the type of protocol is IP v4.

If the value is 0x86DD (hexadecimal), it indicates the type of protocol is IP v6.

The data field contains the actual data and its range is from 0 10 1500 bytes.

FCS is a4 byte field that added at the end of the frame after data in the ethernet frame. The main purpose of FCS is to detect the error that has occurred during the frame transmission. It uses a special algorithm called CRC or Cyclic Redundancy Check for error detection and correction during transmission.

Hence the actual fields of the frame header are the destination, source, Type and FCS.

The minimum size for the ethernet frame (header + payload + trailer ) must be always 64 bytes.

What is a mac address in networking

The mac address stands for Media Access Control Address. It is a globally unique identifier assigned to the NIC (network interface card ) of the device that is connected to the computer network

The mac address is 6 bytes of 48 bits in length. It is represented in hexadecimal format. It is written in 6 octets separated by colon or hyphen.