In this section, we will going to discuss what is input device and the different types of input devices used in computer system.

Input device is a computer hardware peripheral used to input data to a computer in order to process this data. It is the input device through which user directly interacts with the computer.

There are different types of input devices used to input data to computer. Some of the popular and frequently used input devices are: 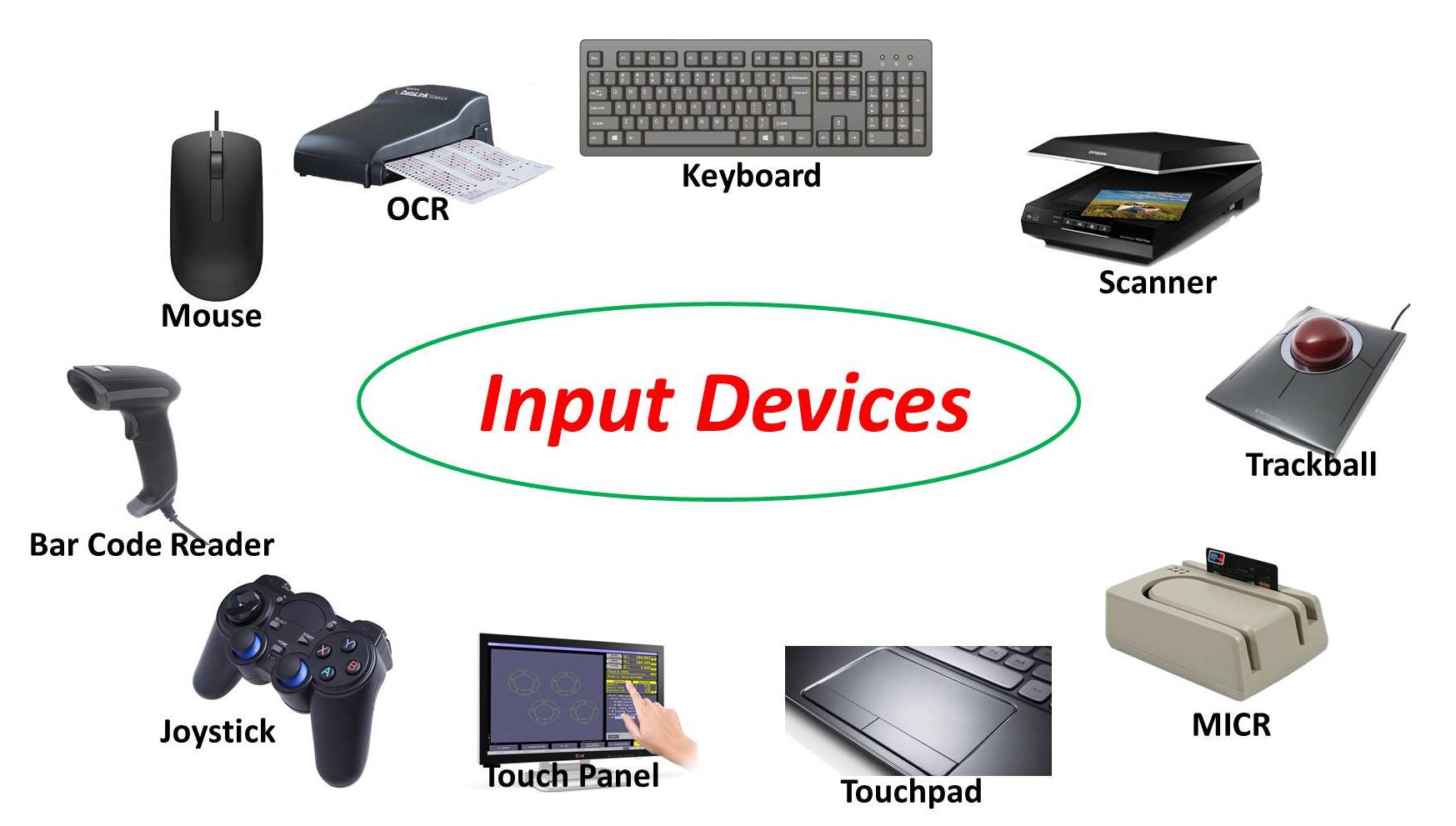 Keyboard is the most popular and commonly used input device which resembles the traditional type-writer machine. Keyboard contains alpha-numeric keys, special symbols and some special control and function keys to provide the input to the computer. The modern keyboard contains 104/ 108 keys for various functions to input text, numbers, symbols and other special functions. These keys are grouped into certain groups according to their functions and operations.

Alpha-numeric keys contains keys from A to Z, 0-9 and some special keys like TAB, CAPS LOCK , BACKSPACE, SPACE BAR and ENTER keys. These keys are arranged in same fashion as the traditional typewriter. Sometimes, this arrangement is called QWERTY.

Modifier keys: SHIFT, ALT and CONTROL keys are the modifier keys because they alter or modify the input of other keys.

Numeric keypads: This keypad resembles a digital calculator and located on the right side of the keyboard. It consist of 10 number keys from 0  to  9 , arithmetic keys like (+),(–),(*), and(.). NUM LOCK KEY is also included in Numeric key pad which is used to activate or deactivate the numeric keypad.

Function keys: Function keys ranging from F1 to F12 have specific functions. Mostly, they are used as shortcut keys to perform certain functions.

Mouse is also a very popular handheld input device which consists of two or three buttons, one left button and one right button. In some mouse, one scroll button is also available to scroll across the multiple page documents. The left button helps to select a menu or icon on the screen with single click. The double click of the left button prompts to open a file, program or folder. The right click helps to open the more options like copy, paste, properties of files and folders etc.

The different types of mouse are available in market:

Mechanical mouse consists of a rubber ball on the bottom of the device. The ball is allowed to roll on the plain surface. The sensors inside the mouse detect the movement of the ball and the curser moves around the screen accordingly.

Optical mouse consists of Light Emitting Diode (LED), photo sensor and digital signal processor (DSP). The cursor movement is realized by sensing the reflected light emitted by light emitting diode. The optical mouse contains a tiny low resolution camera which takes microscopic image more than 1000 per second of the surface beneath it. When mouse is moved on the surface, the photo sensor senses the variations in images and then it calculates the movement, position and speed of the mouse.

Wireless mouse, also called cordless mouse doesn’t have cables with connectors (USB or PS2) attached to it. It communicates with the computer wirelessly. The wireless technology like Bluetooth, radio frequency, infrared signals is employed for transmission and reception of signals between mouse and the computer. The mouse acts as a transmitter, whereas USB dongle is used as a receiver and plugged into the computer’s USB port.

Mouse is exclusively made for GUI (Graphical User Interface) based operating system.

Touchpad is another commonly used input device which consists of a flat touch-sensitive surface. The user is allowed to slide the fingers on this touch-sensitive surface in order to move around the cursor on the screen. The buttons are also placed next to the touch pad. These two buttons works same as that of the mouse. The touch pad comes fitted with laptop. Unlike mouse which has to be moved on the flat surface to move the cursor  on the screen, touch pad  is placed fixed in one place and fingers are moved on it to traverse the cursor around the computer screen . Modern touch pad works by just tapping the fingers on it. It senses the multiple tapping for different functions, such as single tapping to select the icons of files, double tapping to open the files or folder.

Another important input device is scanner that is used to input the hard copy of documents or images to the computer and converted them to soft-copy image. Scanner uses Charge Coupled Device (CCD) array to scan images or documents and convert them into digital form. The scanned images can further be edited, manipulated and printed by using image editing software. The different types of scanners are being used. Among them, the most commonly used are:

Hand-held scanner is portable in size. The scanner consists of light emitting diode and the document to be scanned is placed on the scanner facing the LED light. The scanner with light facing towards the documents is slowly dragged over the document to be scanned with constant steady speed. When the light is passed over the document, it is then converted to the digital image.  These scanners don’t exhibit high resolution image. Hence, they are used where the quality of document doesn’t matter. Hand-held scanner is used for reading the data from the price tags, shipping labels, inventory part number, and so on.

Flat-bed scanner resembles a photocopier machine. It consists of a glass plate placed on top of the scanner and a lid is provided to cover the glass plate during scanning. The document to be scanned is kept on the glass plate and the lid is closed. Below the glass plate, is light beam, which is allowed to move from left to right and scans the document line by line slowly and steadily. It takes almost 20 seconds to scan the document of A4 size. They have better quality images. It has the capability to scan both colour and greyscale images. However, they are bigger in size and more costly than the hand-held scanners.

Touch panel or touch screen is an input device which is placed on the top of mobile screens, laptop screens. The user is allowed to select menu or icons directly by touching them with fingers.  The touch screen is popularly used in mobile phones, laptops, bank ATM screen, and information kiosk machine. The use of touch screen makes user more interactive and user-friendly.

OCR is a special type of input device whose working principle is as similar as scanner. The only difference is that scanner scans the whole document as an image and this image is manipulated by using image editing software whereas OCR scans each character or text of the documents by using OCR software. The OCR software translates each character into the ASCII code that the computer can interpret as letters, numbers and special characters. The use of OCR makes data entry easier, error free and consumes less time. However, it is very costly and it is very difficult to recognise the characters, if the is not properly typed.

OMR is the process of detecting human marked data made by dark pen or pencil on a document like survey paper, test paper. The mark on the document is scanned by optical mark reader and detects the mark correctly by their position and darkness. OMR is mostly used to check the multiple choice answer sheets of examinations. The special marks like bubbles or squares are made on the answer sheet with dark pen or pencil to denote the correct answer. The OMR detects these marks   and they are processed by special software. OMR detects the marks by passing light on the paper and captures the reflected light. When light passes on the dark marks, less light will be reflected. Hence, every mark present on the sheet is detected by this variation in reflected light.

A trackball is a type of input device which looks like a mouse. It consists of a roller on the top with selection buttons on the side of the device. It functions as similar as mouse which is used to move cursor on the screen. The user spins the ball to a particular direction to move the cursor on that direction.  Sometimes, it is considered to be better than mouse, because it requires less space and little arm movement. It is used in portable computers.

It is an input device specially used to control the motion of an object/character in a video game. It consists of a stick which is mounted on a base. The user can move the stick in all direction in order to control the motion of a character or an object while playing the game. Other than video games, joysticks are also used in flight simulators to emulate the controls of the planes.