In this section, let us explain What is BIOS (Basic Input Output System), functions of BIOS such as POST, Bootstrap etc. 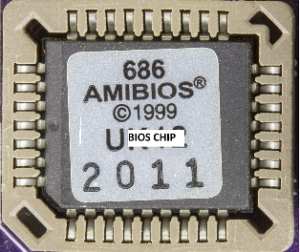 BIOS is the acronym for Basic Input Output System and it is pronounced “bye-os“. It is a program stored inside a ROM chip on your computer.

The BIOS is basically a programmable ROM chip. The instructions inside it are hardcoded in the manufacturing level. Hence,  it is also called firmware.

BIOS in a computer system comes into action when we first start the computer and does the following basic functions:

Power On Self Test ( POST) is the initial task performed by BIOS, as soon as the computer is turned on. It checks all the necessary hardware required during the booting process such as a keyboard,  hard disk, floppy drive, RAM, etc. If all the hardware seems to be working properly, then the computer starts to boot.

If any of the above hardware is not detected or not working properly, it generates an error, either in the form of text messages on the display screen or the number audible beeps codes.

The system further halts the booting process. The POST errors are mostly fatal, because of hardware failure. Hence, we need to either repair or replace the damaged hardware.

The different error messages or number of beep codes determine which hardware is not working.

Bootstrap is a small piece of code in BIOS that is required to carry out the booting process. After the POST operation is successfully performed, bootstrap code in BIOS  searches for an operating system in secondary memory such as hard disk, floppy drive, or optical drive.

Any of these storage media contain the operating system and the booting sequence will decide which drives be searched first. When an operating system is found in any of the secondary storage, it is then loaded into the main memory.

CMOS is an acronym for Complimentary Metal Oxide Semiconductor. It is a part of BIOS but works differently as compared to BIOS. CMOS contains some user-level hardware settings like date and time settings, booting sequence, BIOS password setting, a setting of CPU overclocking, etc.

Basically, CMOS is non-volatile in nature. Hence, the user CMOS settings are backed up by CMOS battery, so that the content will be retained when the system is powered off.

BIOS driver is a collection of programs encoded in ROM chip by different motherboard manufacturers. The BIOS driver is responsible for starting the operating system and interacting with the hardware.

BIOS driver is specific in nature and depends on the motherboard manufacturer which is compatible with different hardware.

Device drivers come along with the BIOS in older BIOS. But, nowadays operating system itself stores different device drivers.

Sometimes, the BIOS needs to be upgraded or re-installed.  When BIOs gets corrupted, it can be rewritten to the ROM chip. The process is called Flashing.