Output device is a computer hardware peripheral through which user is able to get desired meaningful result after the input data has been processed. The meaningful output can be displayed or viewed on a display unit (monitor), printed as hard-copy on a printer or listened as audio output through speaker. In other words, the output data may be in the form of text, graphics, audio or video. Generally, output is categorized into two types: Hard-copy and Soft-copy.

Hard-copy is the tangible form of output. This output is printed on a paper by using printer or recorded on other durable surface such as microfilm. The hard copy is permanent and  is a relatively stable output. The most common hard-copy devices are:

Soft-copy is the electronic version of output data which is stored in a computer memory such as hard disk. It is not tangible and permanent form of output. This type of output can be displayed on the computer screen in visual form or can be listened as audio through speakers. The common soft-copy output devices are: 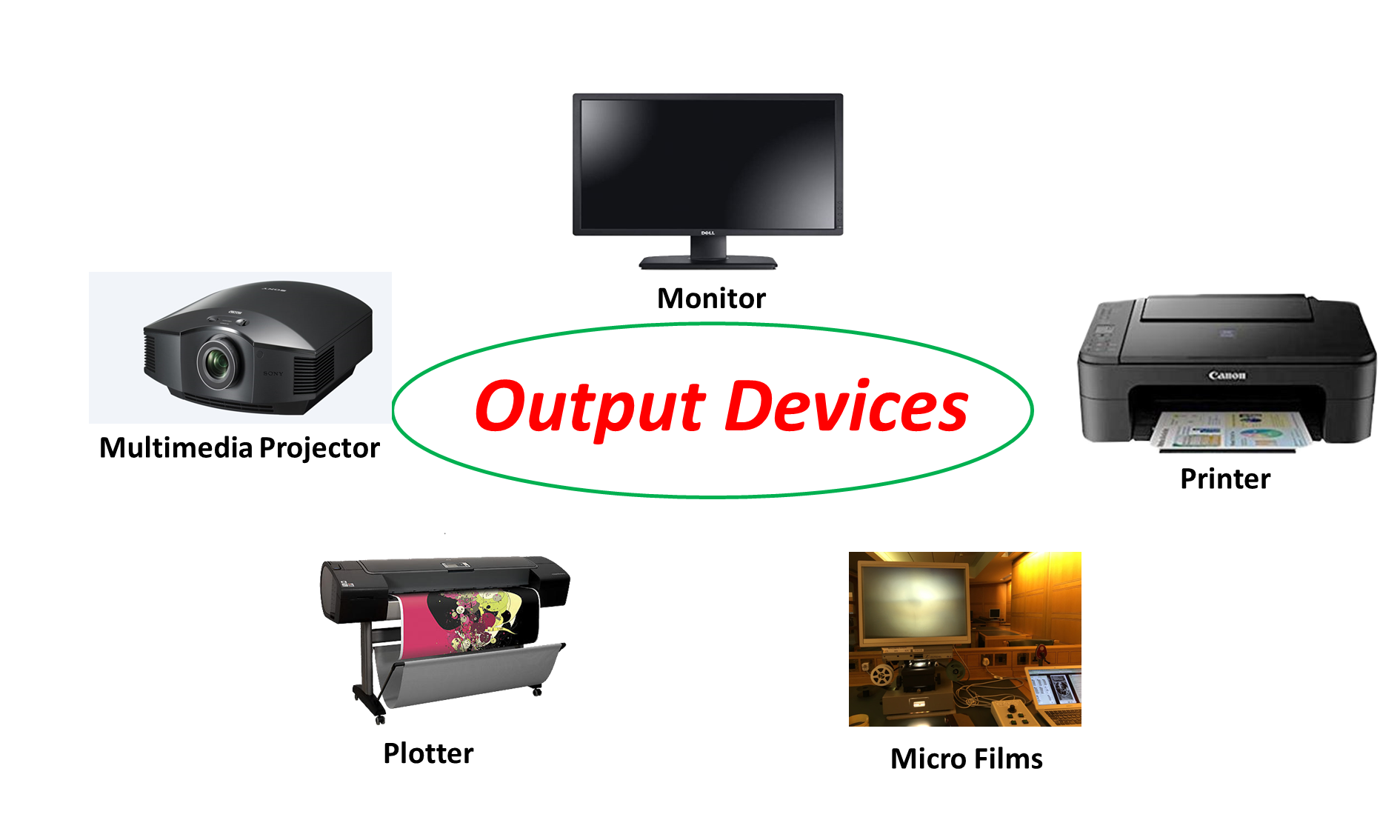 Printer is the commonly used output device used to produce or print the hard-copy of the output data on a paper. The output data may be text documents, images or graphics.  There are different types of printers used according to their mechanism and printing quality.

Basically, printer is classified into two types according their printing mechanism. They are:

It is a type of impact printer which prints one character at a time. It consists of a printer head which is allowed to strike the paper through ink ribbon. Since, the impression made by the head to the paper is in the form of dot, the print quality is determined by the number of dots made by the printer head pins. More are the number of pins on a head, higher is the printer resolution. The number of pins vary from 9 to 24.The speed of printer is measured in characters per second (cps) and it can vary from 200 to over 500 cps. Dot-matrix printers are inexpensive and have less operating cost. They are used in low quality applications like cash register, invoice copy etc.

It is also a type of impact printer which consist s of a mechanism that looks like a daisy flower and its printing arm resembles the petals of the flower, hence the name daisy wheel printer. It is commonly known as letter quality printer, because the print quality is better than that of the dot matrix printer. However, it has slower speed of about 100cps and can print only alphabets, numbers and special characters, but not graphics.

Ink-jet printer uses a series of microscopic nozzles to spray liquid ink directly on the paper. It can print both black & white and colour pages. It produces very less sound while printing as compared to impact printer. The inkjet printer produces high quality print with a resolution of more than 600 dpi; hence the printing cost is relatively high. The printing speed is moderately high; however it takes more time to print multi-colour pages.  It is commonly used in homes, offices, small businesses, etc.

Laser jet printer uses the same basic technology as the conventional photo copier machine to print out the documents, images, etc. It produces a very high quality print and works very much faster than other printers discussed above. It can produce and store an entire page before it prints, hence it is also called page printer. The print resolution ranges between 300 to 2400 dpi. It can print  4-32 text-only pages per minute for microcomputers and up to 200 pages per minute for mainframes. The complex technology is used for printing operation in LaserJet printer, hence it is more expensive to buy and maintain than the other printers.

Plotter is another output device just like printer to draw vector graphics like high-resolution charts, graphs, maps, circuit diagram and other line based diagrams. It uses a series of different coloured (Cyan, Magenta, Yellow and black) pens to draw multiple, continuous and accurate lines. Since, the printing output must be more precise, accurate and minute details, it operates in much slower speed as compared to other printers. Plotters are used for high precision printing for Computer Aided Design ( CAD) , Computer Aided Manufacturing ( CAM) and AUTOCAD ( computer assisted drafting).

There are two types of plotters available:

Drum plotter consists of one or more pens mounted on a carriage that is placed horizontally across the drum and the printing paper is placed over the drum. The computer gives the plotting instruction to the drum to rotate it in both clockwise and anticlockwise direction.  Hence, the pen having different colour to produce multicolour design is allowed to move horizontally only, while the page moves vertically to computer to perform the print operation.

In flat-bed plotter, paper is placed stationary on the flatbed surface of the plotter. The pen of different colour is mounted on the carriage and this carriage is allowed to move horizontally, vertically, left and right to draw the lines. The flat-bed surface can be of varying sizes ranging from A4 size paper to more larger size , hence can be used for designing of ships, aircrafts, buildings and so on.

Microfilm is an output device which is in the form of a fiche. It records the computer output directly from the computer tape or cartridge. It is a high speed and low cost process to produce the copy of data on microfilm than that of paper printer. Normally, the film roll is 16 mm wide and the film image is 1/24 of the original document. Microfilm reader is used to read data/images from microfilm. Such microfilms are deployed for storing large amounts of archive data in a permanent film format for long periods of time.

The monitor or video display unit is the most common output device which displays the meaningful result as a soft-copy output. The monitor looks like a television screen on which the output is displayed and viewed either as colour or monochrome display. A monochrome screen uses only one colour to display text on contrasting background. The monitor can be used to show text, numbers, and graphics images. They come in many different sizes such as 14,15,17, 19, 1nd 21 inches. Aspect ratio and screen size are the two parameters which describe the size of the display. Aspect ratio is the ratio of the width and the height of the display screen, whereas the screen size is the length of two opposite corners of screen diagonally.

The most common types of monitors are:

CRT monitor is based on CRT technology which consists of a vacuum tube having electron gun at one end and the florescent screen at other end. The high intensity rays of electrons are allowed to pass through the deflection coil which directs the beam towards the phosphor coated screen and strike on it to form images. Although, CRT monitors are almost obsolete after the advent of the flat screen like LCD or LED display, CRT were popularly used during the early days of the computing technology.

LCD monitor is based on liquid crystal display (LCD) technology. Unlike, CRT monitor which looks bulky and heavier, LCD screen is much lighter and compact. Its screen has flat surface. LCD screen consists of liquid crystal which is neither solid nor liquid, but it has a molecular property which behaves like crystalline. LCD screen contains multiple layers  which includes backlight, polarized filter, electrodes. In LCD display, CCFL (Code Cathode Fluorescent Lamp)  backlight is used which provides the light source to the display. The light from the backlight is passed through the vertically and horizontally polarized filters which convert the scattered light into a single axis beam. These beams are then passed through the TFT (Thin Film Transistor) and liquid crystal. There are thousands of small transistors which controls the intensity of the light. Each transistor controls single pixel and each pixel consists of three sub pixels: red, green, blue. The variation of light intensity on all the pixels helped to display texts, images on the screen.

LED monitor employs the same technology as the LCD screen. The only difference is that LED screen uses LED as the light source instead of CCFL backlight. The LED screen is lighter than LCD and also they are energy efficient.

Speaker is also a type of output device which is most commonly used in computer system. Speaker can convert the electrical signal into sound energy. Speaker receives audio inputs in the form of electrical signal and then coverts them into audible sound. The sound energy is measured in terms of frequency and amplitude. The low pitch and high pitch sounds are determined by the frequency. The audible frequency range produced by speaker is from 50 Hz to 5 kHz. The amplitude determines the increase and decrease of the volume level of sound energy. The higher is  the amplitude the, greater the sound volume and vice versa.