In this section, we will discuss what are the basic components of the computer system and its functions. 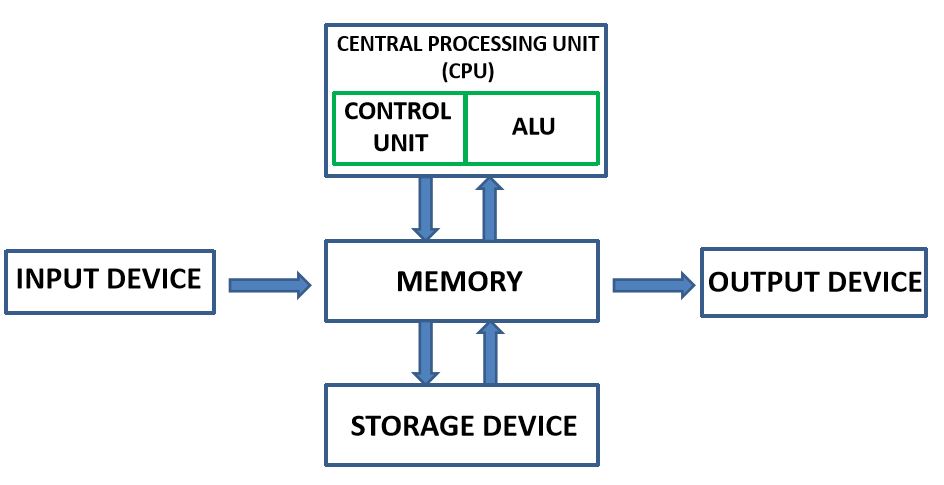 Commonly known as Input Device, it is used to give instruction or raw data to the system for processing. The common examples of the input device are mouse, keyboard, joystick, scanner, touch screen, OMR (optical mark reader), OCR (optical character reader), etc.

For more details on input device, read this article: What is an Input Device

For details on output device, read this article: What is an Output Device.

It is the main component of a computer where the actual processing of input data occurs and gives a meaningful result at the output unit. It is commonly known as the central processing unit, in short, CPU, and also considered to be the brain of the computer.

CPU is further subdivided into the Control Unit and Arithmetic Logic Unit (ALU).

Control Unit controls all other units of computers. It interprets the input signal and controls the execution of the instructions. It instructs the input unit where to store the instructions received from the user, then passes the instruction to ALU for processing and after the processing is done by ALU is then passed to the memory. The main job of the control unit is to control the flow of data and instructions from the memory unit to ALU and vice versa. Sometimes it is also known as the central nervous system of the computer and synchronizes its working.

Arithmetic and Logic Unit (ALU) is the subunit of CPU where the actual processing of data is performed. CPU does this by using basic arithmetic functions like addition, subtraction, division, multiplication, and logical decision. Once the computation is done by the ALU, the processed results are transferred to the memory by the control unit and then send them to the output unit for displaying the result.

This unit plays a significant role in the functioning of the computer. Every instruction or data received from the input unit is stored in the memory unit. It holds the intermediate and final results before they are sent to the output device for display of the result.

CPU has a relatively very small amount of memory to store a few instructions of programs or data they process. Hence, there must be some alternatives to hold a large amount of data. This problem is solved using memory which is located outside CPU. Basically, this external memory is of two types.

The main memory which is located closer to the CPU is very fast and holds the information or programs that are actively working with. But, it is volatile in nature. That means it loses all the stored data when the computer is turned off. Main memory is also named as random access memory (RAM).

1 thought on “What are the Components of Computer System”